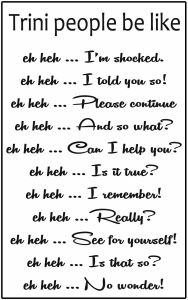 So you’ve landed in sunny T&T, were met by who many call “the happiest people on earth”, but you can’t quite figure out what’s being said. Good news, you’re not alone.

In Trinidad and Tobago, many different dialects are spoken. Caribbean Standard English is spoken by many, but mostly in a formal or academic setting. What you’ll encounter most however, is Trinidadian English Creole – a style of talking that merges African, French, Spanish and English twangs, born from our nation’s multicultural history.

Trinidad and Tobago, for those who’d like a bit of history, has undergone many voluntary and forced migratory processes that have led to the island’s rich and diverse population characteristics and hybridized language dialects.

From Spanish, French, Dutch and British colonizers to African slavery, to the migration of Indian, Chinese and Portuguese during post-emancipation, indentureship schemes, one thing is for certain:

Our tiny islands have been shaped many different races, religions, cultures, ethnicity and their respective languages so much so that it is almost impossible to separate the modern-day manifestations of these influences, from each other.

So what you might hear when you’re browsing through the hustle and bustle on the streets of Port-of-Spain, or when you visit the Tunapuna market for some local meats and vegetables will be far removed, and much more unique from what you might be accustomed to.

Communicating with Trinis has the potential to leave you spellbound or completely and utterly confused – so let us help you out!

Here are a few Trini sayings or slang terms and phrases that you may encounter and their “Standard English” translations/definitions.

Yuh fadda is a glass maker?

Guys, the list can go on and on. So there you have it – just a few Trini slang terms and saying that you might encounter while on our beautiful island. You’ll definitely come across some that are not on our list – so if you’re confused, ask a question!

Until next time! See our homepage for a direct link for booking your stay with us.